This is a perfect four day tour, taking you to some of the most important sites in Greece: Epidaurus, Mycenae, Olympia, Delphi and Meteora.

1st DAY: We begin our tour leaving Athens in the morning and arriving, via the coastal highway firstly at the Corinth Canal, an engineering marvel of the late 19th century, connecting the Gulf of Corinth with the Saronic Gulf. Continuing along the Saronic Gulf coastal road we arrive at EPIDAURUS.

Arriving at Palaia Epidaurus, we will visit the ancient city theater, a very well preserved theater (the small Theatre of Epidaurus) built in the 4th century BC, dedicated to Dionysos the god of wine. The theater originally accommodated about 2000 spectators. We will then go to Asklepieion of Epidaurus (a UNESCO World Heritage Monument) which was an important healing center, considered the cradle of medicinal arts and the mother of all other Asklepieia built throughout the Hellenic world. This was considered to be the birthplace of Apollo’s son Asklepios.

The Theater of Epidaurus (built in the 3rd century BC) is the best preserved theater of ancient Greece which is still used today for the Epidaurus Festival because of its incredible acoustics, allowing spectators to hear perfectly unamplified spoken word in all parts of the theater. There are seats for about 12,000 spectators.

We then depart for Nafplion (the first capital of modern Greece in 1829), with its impressive fortress of Palamidi towering above the town (a short stop), and continue on to MYCENAE (a UNESCO World Heritage) which we will visit.

MYCENAE: According to Greek mythology and Homer’s writings, this was the town of Agamemnon, leader of the Greeks during the Trojan War. Schliemann was able to find Mycenae based on Homer’s epic work and using it as a guide. Mycenae is a very important archeological site of Greece and was the center of the Mycenaean civilization (from 1600 to 1100 BC), here you can see the Cyclopean Walls, the Lion Gate (possibly the most famous site of Mycenae), the Tomb of Agamemnon, the huge arches and the palace of Mycenae. The most important monuments visible today were erected between 1350 & 1200 BC, when the Mycenaean era was at its peak.

2nd DAY OLYMPIA: One of the most influential ancient Greek sanctuaries located in the North Western Peloponnese, established in the valley created by the convergence of the Alpheios and Kladeos rivers, in an area of natural beauty and serenity.

The famous sanctuary became the centre of worship of Zeus, father of the gods. In 776 BC the kings of Elis, Pisa and Sparta organized the games in honour of Zeus and developed the idea of the sacred ‘truce’ and soon the quadrennial festival acquired a national festival.

In this universal place evolved the ‘Olympic Idea’ – symbol of peace and competition, while giving importance to the ideals of physical and metal harmony.

Olympia is the birthplace of the most important athletic event of the world today, the Olympic Games.

We will visit the Archaeological Site, which includes ruins from the Bronze Age to the Byzantine eras as well as the ancient stadium where the first Olympic Games took place, the Doric Temple of Hera, the Heraion Peristyle, the Palaistra, the ruins of the Temple of Zeus and much more.

We will also visit the Museum containing among other articles the sculpted decoration of the Temple of Zeus, the statue of Nike and the Hermes of Praxiteles.

From Olympia, we then drive via PATRAS to RION then across the channel to ANTIRRION on the new suspended bridge.

We soon drive through NAFPAKTOS and continue to DELPHI, where we will have dinner and stay overnight.

3rd DAY DELPHI: Delphi is one of the most important archaeological sites in Greece, comparable only to the Acropolis of Athens.

According to Greek mythology, Zeus sent two eagles from the ends of the universe to find the naval of the world, and this is the place where they met. The history of Delphi begins with the myths of ancient Greeks, that in the beginning the site was sacred to Mother Earth, guarded by a serpent Python.

Apollo later killed the serpent and in gratitude a sanctuary was built there to honour him.

The importance of Delphi for the ancient world cannot be forgotten, many important political decisions were made after consultation at the Oracle, while no new colony was founded without its consent. Due to its increasing influence, it grew from a small village to a place where Architecture and the Arts flourished, beginning back in the Mycenaean Period (1600-1100 BC).

Between the 6th and 4th centuries BC, the Delphic oracle being the most reliable was at its peak. The Pythia (priestess) delivered while the priests of Apollo interpreted. The oracle was consulted by many, ranging from ordinary people to rulers asking for its advice.

The sanctuary expanded, and soon after included many Temples, theaters and a stadium that were constructed. The most important monuments to see are the:

After the visit we depart for KALAMBAKA, where we will have a short visit in the village once we arrive, later dinner and an overnight stay. (B.D)

4th DAY METEORA: We will be visiting one of the most beautiful places in Greece. Meteora, which means “suspended in space” is one of the main groups of monasteries, second only to Mount Athos in importance in all of Greece.

Now you can reach the top by following the steps which have been cut into the rock. The monasteries have been classified by UNESCO as a “unique phenomenon of cultural heritage”. The most important Monastery is the Great Meteoron which was built in the middle of the 14th century.

After the end of our visit, we start the return trip to Athens, passing through THERMOPYLAE, where Leonidas and the 300 Spartans fought the Persians in the Greek / Persian war of 480 BC. (We will stop to take photos here).

Note: This visit can take place sometimes on the third day.

Coastal drive passing the island of the
5 hrs
Apr – Oct 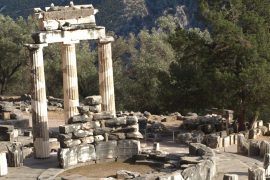