Country of “Alexander the Great”

1ST DAY: Soon after we leave Athens, we pass Levadia and then on to Arachova (which is known for its multi-coloured carpets), and finally arriving at Delphi.

According to Greek mythology, Zeus sent two eagles from the ends of the universe to find the naval of the world, and this is the place where they met. The history of Delphi begins with the myths of ancient Greeks, that in the beginning the site was sacred to Mother Earth, guarded by a serpent Python. Apollo later killed the serpent and in gratitude a sanctuary was built there to honour him.

Due to its increasing influence, it grew from a small village to a place where Architecture and the Arts flourished, beginning back in the Mycenaean Period (1600-1100 BC).

Between the 6th and 4th centuries BC, the Delphic oracle being the most reliable was at its peak. The Pythia (priestess) delivered while the priests of Apollo interpreted. The oracle was consulted by many, ranging from ordinary people to rulers asking for its advice.

Delphi, over the centuries started to include other events, the most important being the Pythian Games held every 4 years and many different cultural events. The sanctuary expanded, and soon after included many Temples, theaters and a stadium that were constructed.

After the end of the tour, the rest of the day will be free to do whatever you like.

Dinner and Overnight will be in Delphi (D).

2ND DAY: In the morning we will leave for KALAMBAKA passing the towns of AMPHISSA, LAMIA and TRIKALA in central Greece.

Once we arrive in KALAMBAKA, we will have a short visit in the village, and later in the afternoon we will visit the picturesque METEORA, one of the most beautiful places in Greece.

Meteora, which means “suspended in space” is one of the main groups of monasteries, second only to Mount Athos in importance in all of Greece.

Now you can reach the top by following the steps which have been cut into the rock.

The monasteries have been classified by UNESCO as a “unique phenomenon of cultural heritage”. The most important Monastery is the Great Meteoron which was built in the middle of the 14th century.

Meteroa is a blend of natural beauty, history, man made scenery and man’s desire for spiritual elevation where the visitor can enjoy one of the best panoramic and majestic views possible of the Plain of Thessaly.

At the end of our visit we will return to Kalambaka for dinner and overnight stay.

3RD DAY: In the morning we drive by Trikala and Larissa arriving at the sacred Macedonian town of DION, at the northern part of Mount Olympus.

The sanctuary of Zeus and Dion was famous and important in ancient Greece, and second only to Delphi, with a history of over 1500 years and reaching its peak in the 4th century BC.

There are several interesting monuments worth seeing, including the Ancient and Roman Theatres of Dion, the Necropolis and the Great Thermai of Dion.

We then continue to THESSALONIKI, the largest city in Northern Greece where we will visit the White Tower (the main landmark of the city), where an exhibition on the city’s history exists.

Following we visit the Kamara (The Arch of Galerius) built in the 3rd Century BC and the Rotonda.

We will then go to the most impressive museum of Thessaloniki and after we can continue with our sightseeing.

Dinner and overnight will be in Thessaloniki.

4TH DAY: In the morning we start our trip to Pella, birthplace of Alexander the Great, where we stop for a visit.

The Archaeological Museum will allow you to acquire a picture of Pella at its peak, when it was the capital of the Macedonian State since the early 4th century BC.

We then continue to Vergina (Ancient Aigai- first capital of Macedonia) to visit King Philip’s tomb and the famous Vergina Treasures – the golden urns, the golden wreaths and the weapons and armor of King Philip II which are on exhibition.

Our trip continues to Lefkadia, where we will see the excavations being carried out in the ancient town of Mieza. The main ancient remains found in this area are tombs, of the Macedonian type plus many different mosaic floors found in the ruins of various houses and buildings.

At the end of our visit, we will return to Thessaloniki via Veria to have dinner and spend overnight.

5TH DAY: We will start our return trip to Athens by passing the Tempi Valley, Larissa, Lamia and after, to THERMOPYLAE where Leonidas and the 300 Spartans fought the Persians in the Greek / Persian war of 480 BC (we will stop to take photos here), then continue to Kamena Vourla and to Athens.

The ultimate skydive experience in Greece. Enjoy
6 hrs
All year 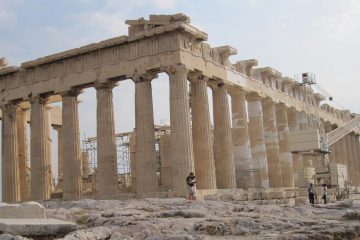 Don’t leave Athens without seeing one of
1 hr 30 min
All year
TICKET PRICE
From: 782.00€
Currency Converter