This tour will enable you to experience the feeling of the glorious past along with modern present day Athens.

Athens is a modern city with a magnificent past, which can be seen by just taking a walk around the centre. You will notice different periods in the history of the city, from the ancient monuments, the neo-classical buildings to modern structures of the 20th Century.

As we ascend up to the world famous Acropolis (called also the Sacred Hill), we acquire a lovely view of modern Athens. On top we see the remarkable Parthenon, the Propyleia, the Erechtheion and the Temple of Nike while on the side we have the Herodes Atticus Theater.

From there we descend down to the Temple of Zeus, after we continue to the Panathinaikon Stadium (the first modern Olympic Stadium, where the games were held in 1896) then to Constitution Square where we see the Tomb of the Unknown Soldier in front of Parliament House.

As we enter and drive down Panepistimiou St, we will see lovely neo-classical buildings along the street, the Catholic Cathedral, the Academy, the University and the National Library.

In contrast, visit the new Acropolis Museum, finished in 2009 comprises of three stages, each stage represents different periods in the history of the Sacred Hill. It was constructed to house the priceless exhibits found on the Acropolis, during the many years of excavations. Some of the exhibits here were also found during the excavation for the construction of the museum.

One of the unusual and impressive aspects of the museum is the extensive use of glass, in and out of the building.

The museum excavations are visible under the glass floors giving a distinctive and impressive view of ancient Athens, while from different stages we have a beautiful view of the outside area.

There are approximately 4,000 objects on display which will magnetize all visitors arriving at the museum.

A fascinating Athens introduction activity, pedal around
3 hrs
All year

A combination tour of two world heritage
2 days
All year
TICKET PRICE
From: 82.00€ 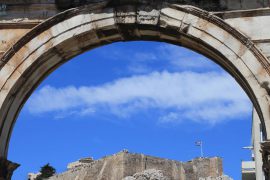