Once in Athens, this tour should not be missed! It covers every important part of Athens long history – its monuments and culture, with the help of our expert guides.

Athens is the largest city and the capital of Greece and, even to this day, elements of its ancient past are still evident as you stroll through its streets.

This tour involves many historical periods of the city, found in different areas all within a short walking distance of Constitution (Syntagma) Square.

The most famous monuments in Athens, plus the Acropolis, a world heritage site, are part of this comprehensive tour.

Our guide will give information about all the sites visited to make the tour as comprehensible and pleasant as possible.

A Walk Through the History of Athens

Our tour begins at Syntagma Metro Station, firstly by visiting the museum of the Metro Station (for approximately 10 – 15 minutes), which exhibits ancient artifacts from Athens, found during the excavation and construction of its underground metro.

The tour then continues to the Greek Parliament Building, and the Memorial of the Unknown Soldier to observe the changing of the guards.

After this, we continue to the National Gardens, a lovely area to escape the noisy city, and then to the Zappeion Megaron.

From here you have an excellent view of the Temple of Zeus, with its 17 columns still standing, each 17 meters high, and also the Arch of Hadrian, built in 132 AD to mark the limits of the new and ancient city of Athens. Both of these will be visited for a close up view.

From the Arch of Hadrian we cross over to the beautiful Dionysiou Areopagitou walkway.

We will enter the Acropolis from the southern side, to first visit the Ancient Theatre of Dionysus, built in the 5th century BC, dedicated to the god of wine making.

Our tour will end on the Acropolis, where there will be ample time to take memorable photos and have a magnificent view of Athens.

Discover with us 22 Sites & Attractions

Greek Night under Acropolis, book your place
All year
Athens

Coastal drive passing the island of the
5 hrs
Apr – Oct
TICKET PRICE
From: 47.00€ 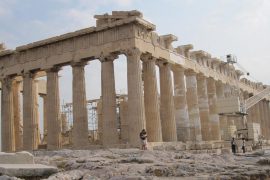